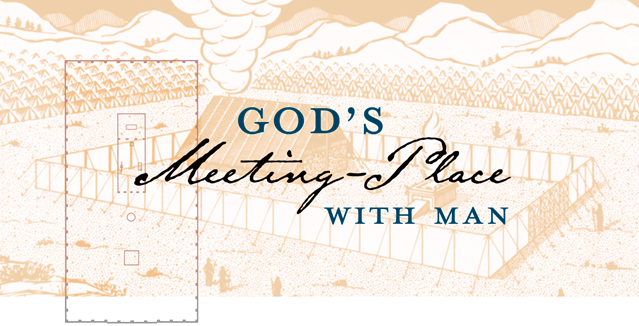 In the Sinai desert 3500 years ago stood a two-room tent set in a large courtyard. The surrounding fence was made of white linen cloth. The gold, silver and copper items used in its construction made the structure worth over FORTY-TWO MILLION DOLLARS by present day valuation! Erected with great forethought God provided detailed instructions for this portable sanctuary. Along with the structure itself God gave specific details for offering many various sacrifices.

Thw word "tabernacle" literally means a dwelling place. It showed Israel that God dwelt with them. However, the terms of its use were very strict. Any deviation could mean the death of the one who did not follow the prescribed course. This illustrates that there is one correct approach to God. All others will fail. In the Tabernacle arrangement God foreshadowed the means for attaining harmony with Him.

As Israel left from Egypt in the Exodus, the Egyptians gave their former Hebrew slaves great quantities of gold and silver ornaments, including copper and jewelry. All this wealth was then donated to the construction of the Tabernacle. Flax was supplied for making the fine quality linen used throughout. The exquisite woods used in construction were obtained in the Arabian Peninsula. God gave special skills to the craftsman who joyfully created the furniture and beautiful tapestries, as well as all the items needed to carry out the worship of God. 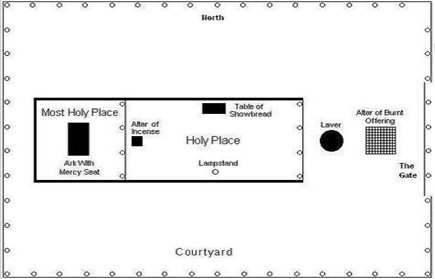 The Court of the Tabernacle

This simple, yet meaningful, structure was Israel's place of worship from the time of the giving of the Mosaic Law until it was replaced by Solomon's magnificent temple. It served as a temporary meeting place with God until the permanent building of a temple was constructed in Jerusalem. The New Testament book of Hebrews describes the Tabernacle in terms of its symbolic significance. It many services and sacrifices were a foregleam of the deeper message of salvation. 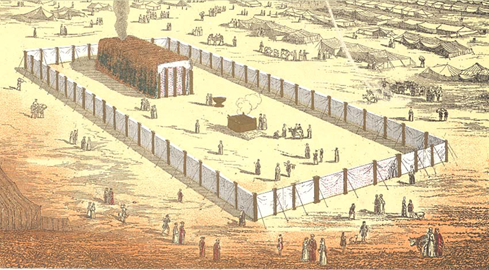 The high wall of white linen curtains is like a wall a wall of faith that separates believers from the world outside. There is only one gateway to enter the courtyard, reminding us of Jesus' own words.

This gate or door represents Christ. In scripture colors are significant. White represents purity, blue describes faithfulness, while scarlet, the color of blood, signifies sacrifice. Purple is the color of royalty. The white linen curtain represents Jesus' sinlessness. It was interwoven with threads of blue (his faithfulness) and scarlet (his sacrifice) and purple (Jesus' royalty as King of Kings).

Upon leaving the world behind, the believer symbolically enters the courtyard and sees a Brazen (or copper) Altar. The most significant sacrifices occurred on the Day of Atonement. On that special day a bullock was sacrificed, and its blood sprinkled before

God in the Most Holy compartment. This offering represents the sacrifice of Jesus' perfect humanity. It is through his sacrifice that our race will receive atonement for sin and be brought back into harmony with God. 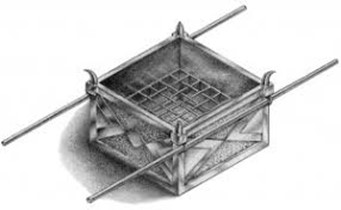 As one moved further into the court, beyond the Brazen Altar was a piece called the Laver. It was made from copper mirrors donated by the Hebrew women. It was filled with water and used by the priests to wash themselves. Water represents truth. The water of the laver represents the message that we are sinful and in

need of cleansing. By washing at the Laver, the priests could then accomplish their duties. This is a beautiful symbol of how true believers first recognizes their sinful condition and then seek the cleansing power of God's word.

However, standing at the Laver was just one step in the journey toward God, who dwelt in the Holy of Holies. To enter the first compartment, called The Holy, a priest would have to lift the embroidered curtain and go under it. Entering the Holy is a symbol of the individual's dedication to God. It is a humble act of giving up ones will, pictured by the bowing priest. In the court, those who saw the sacrificial altar and could appreciate Jesus' sacrifice, were still limited. Before fully dedicating themselves, pictured at the entrance to The Holy, they could not partake of the benefits of being that were inside.

This holy room represents the sanctified condition of the believer. As they follow in the footsteps of Jesus, they share the blessings pictured in the three articles of furniture that occupy the room.

The warm glow of the lampstand continued uninterrupted — fed by olive oil contained in small bowls on each of the seven branches. 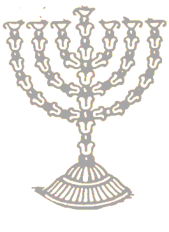 The branches were modeled after the almond tree. The skilled artisan forming first a tiny fruit and then a flower, another fruit, another flower—showing the beauty and character development of the Christian church. The wicks were to be trimmed and the oil replenished every morning and evening. Trimming the wick shows the continual need to trim away all earthly distractions. The olive oil represents God's holy Spirit. Filling the oil describes how God's spirit is renewed each day, offering a continuation of the light through a study of His word.

The golden table of shewbread held twelve flat cakes of bread stacked in two piles of six. For Israel, these represented the twelve tribes that comprised the nation. For the Christian, the bread represents the spiritual nourishment God provides through His word, the two stacks of six may even indicate the 66 books of the Bible. As Christians symbolically stand in The Holy, they are spiritually fed the principles of God at the Table of Shewbread, while their path is enlightened, pictured in the Lampstand. 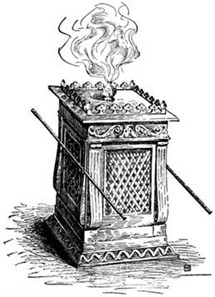 Enlightened by the golden Lampstand of truth, and refreshed and strengthened by the shew­bread, the true Christian offers praise and thanksgiving at the golden Incense Altar—a sweet perfume to the heavenly Father, acceptable because of Jesus' merit. When the priests crumbled the incense upon the this altar, its fragrant perfume not only filled that room but also penetrated beyond the second veil, which represented the very presence of God.

The Holy of Holies

In this Holy of Holies, there was but one piece of furniture—the Ark of the Covenant. It was a rectangular gold-plated box. Its lid, called the Mercy Seat, was pure gold and represented God's justice. On the Day of Atonement the blood of the bullock was sprinkled "upon and before" the Mercy Seat, in the shape of a cross, . This was a lovely picture of atonement, as only the blood of Christ can satisfy God's justice. As part of the same gold that made the Mercy Seat, two golden cherubim were formed. Gazing intently on the center of the box, they represented Jehovah's love and power, waiting for justice to be satisfied before they fly to bless  THE WORLD . 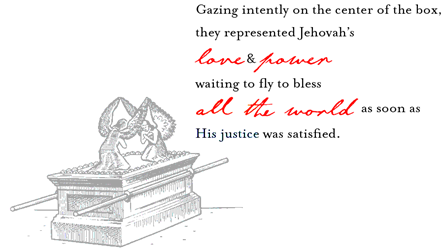 Between the cherubim was a supernatural light, representing the presence of God. Inside the Ark of the Covenant were a golden pot of manna, Aaron's rod that miraculously budded, and the two tables of the Law. By miraculously causing Aaron's rod to bud flowers, God showed His choice of Aaron as the first High Priest. This aptly illustrates the selection of faithful Christians to one day serve as part of a larger priesthood, as they reign with Christ in God's Millennial Kingdom.

The manna in the pot never corrupted, illustrating a the precious promise held out to Jesus' followers that, if faithful, they will receive immortality.

The Tables of the Law show that Christ and his heavenly church will judge the world in righteousness—And be instrumental in writing God's law in the hearts of the people. 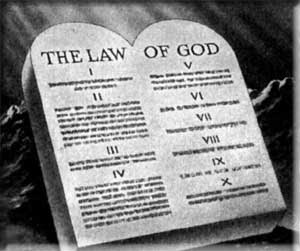 For more information on the tabernacle, order a copy of the book Tabernacle Shadows of Better Sacrifices. https://chicagobible.org/product/10-tabernacle-shadows-of-better-sacrifices/ Further and careful study of the tabernacle and all its intricacies will reveal God's beautiful plan for all mankind.