Peter Chooses His Final Words in the Book of Second Peter

When Peter writes his second letter, he seems to know this will be his last one:

What did Peter think he should talk about in his last letter? He was not interested in presenting new truths but reminded them of what they already knew:

In verses 3 and 4 Peter refers to "divine power" [the power of God] and "divine nature" [the nature of God]. When we read "that ye might be partakers of the divine nature," many think of some future reward, when we will receive immortal life if found faithful. Of course, such a reward will be given to the faithful footstep followers of the Master. But it is possible that is not what Peter is talking about. The text reads:

Have you "escaped the corruption that is in the world" now or are you expecting that you will escape it after you die? In fact, you have "escaped" now if you have given your life to God and are walking according to the Spirit. What qualities describe the nature of God? He is virtuous, knowledgeable, disciplined, patient, morally good, loving… The positive qualities go on and on. But these are not arbitrary characteristics. They are the ones Peter selects:

Peter is saying that if we want to be "partakers of God's nature," we should be copying His attributes and characteristics. He then mentions seven things that should be added to faith. This list is sometimes called the "graces of the spirit." In Galatians 5:22, Paul lists what he calls the "fruit of the spirit" [love, joy, peace, longsuffering, etc.]. The objective of both lists is the development of character fruitage. Following the list of characteristics Peter says: 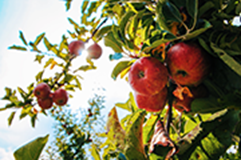 An old, unfruitful tree is a sad sight, and is usually the result of neglect. You cannot plant a baby apple tree, walk away from it, and then come back later expecting to find lots of apples. It will not prosper if left to its own devices. It must be pruned, fertilized, and kept clear of weeds that take the resources it needs to make fruit. An unfruitful tree is no good to anyone and is a good example of what we as Christians must avoid. Peter calls his list of seven attributes, "these things."

Those who lack "these things" lack spiritual vision and cannot see beyond the present, temporal world. Peter has supervised the instruction of those of like precious faith and tells them they are "established in the present truth" [verse 12], an expression found only here. He is talking about truths of the new Gospel, as contrasted to the those of the old Jewish system. Although they are established in present truth, what is going to happen to them when Peter dies? That's what worries him. The problem gets down to a question of faith. What do they believe and why do they believe it? If we believe something for the wrong reason, we might find our faith shaken. So, Peter first says what they have not done: "We have not followed cunningly devised fables" [verse 16]. Then he recounts his own personal experience on the Mount of Transfiguration where he had a glimpse of the future. He uses that experience to stress the importance of what was previously delivered through his prophets.

At the end of chapter one, Peter clearly states that those of "like precious faith" must look to God's word for guidance. That refers to the Old Testament prophets and, when he makes this point again in chapter 3, he adds, "the commandment of us the apostles of the Lord and Savior" (2 Peter 3:2).

Yes, there were holy men who spoke the words of God. But Peter reminds us that there were also others. He begins the second chapter by pointing this out: "But there were false prophets also among the people." Peter is not guessing that perhaps history will repeat itself in his day. He knows it will. By the force of their authority, he and the other apostles were able to restrain the influence of false prophets. But the apostles were dying and soon he would too. What would happen then? That is his main concern: he fears the havoc that can occur because of false teachers who can spin "cunningly devised fables."

The entire second chapter of this letter contains such a scathing denunciation of false teachers that it is hard to be sure just what lesson there is for us today. Sometimes there are situations when it appears a leader has so much influence over his flock that he does all their thinking for them. There is no appropriate situation that could be described by these words: 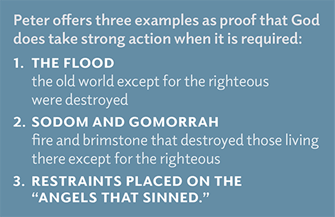 Peter says there are situations when it appears to be no day of reckoning, no retribution for misconduct on the part of leaders or followers. Yet that is simply not true. Peter mentioned the fallen angels before. In 1 Peter 3:19–20, he describes disobedient spirits as "in prison." The freedom of fallen angels to materialize before the flood was taken from them after the flood. They may have been placed under other restraints as well. The point, however, is that God does take action when it is the right time to do so.

What do you do when it appears that everything you believe is being rejected by those who claim to know more than you? Consider the matter of the Lord's promise to return. Peter selects this doctrine for special attention:

These "scoffers" appear to be synonymous with the false teachers of chapter two.

They say he won't ever return because "all things continue as they were from the beginning of the creation. The argument that "all things continue as they were from the beginning of the creation" is summarily dealt with by Peter by showing that believing tomorrow will be like today meant disaster for those living just before the flood. What evidence was there that a flood of water was about to sweep them away? They had the preaching of Noah (and 2 Peter 2:5 is the only place in the Bible where Noah is called a preacher). The people preferred their own unbelief. And they were wrong. Righteous Noah and his family had to watch wickedness go unpunished year after year. It was the same in Peter's day, during the dark ages, and during the last days in which we are living. This is not because God is slow to act. Peter would have us understand that God does not measure time as we do. Only Peter supplies this mathematical formula in 2 Peter 3:8:

The only other similar reference is in Psalm 90:4 where a thousand years are as yesterday and a watch in the night. God is NOT slow … but He IS patient. Things will be done according to His time clock, not man's. How will this present evil world come to an end? Peter tells us it will be "destroyed" by fire:

Many Christian fundamentalists believe this earth will literally be burned to a crisp as the faithful are caught away to heaven. One can understand why they think that way. Peter just said the old world was covered with literal water and it perished. It seems reasonable to assume he expected literal fire to destroy this present evil world. Of course, he also says [in verse 12], "The heavens being on fire shall be dissolved." Some would say this refers to earth's atmosphere which will disappear with the earth.

But Peter never changed his expectation that the times of restitution would take place on this literal earth. He knew that mankind's present arrangements would first have to be swept aside before restitution could take place. That's why he used the Greek word kosmos to refer to what would be destroyed. Although translated world, it really means mankind's arrangements, not the literal world. When he wrote this last letter, Peter used fire as a metaphor for the destruction of man's works. The last words of verse 10 ("the works that are therein shall be burned up") are not correct. Many translations based on older manuscripts say the works of the earth will "be laid bare." The "fires" that bring today's heavens and earth to an end will reveal the hidden works of darkness for all to see. Just as Noah and his family stepped out on the same literal earth that existed before the flood, so also will kingdom blessings be poured out on those living on the same literal earth as we have today. But the political, social, and religious arrangements will all be swept away. This is called a "new heavens and a new earth." At the end of his letter and after delivering the warnings about false teachers and the destruction of mankind's present arrangements, Peter admonishes us to be steadfast and "grow in grace." We do that by following the advice he gave us at the beginning of this letter: We work diligently to add fortitude, knowledge, self-control, patience, godliness, (brotherly) love, and agape (unconditional) love to our faith. Perhaps that's why his list is frequently referred to as the "graces of the spirit"—they enable us to grow in grace.

We have taken a close look at Peter's last written discourse. Since it seems he knew his death was near, it has been instructive to see what he thought he should tell the brethren. Of the many things we find in this letter, two topics are emphasized: 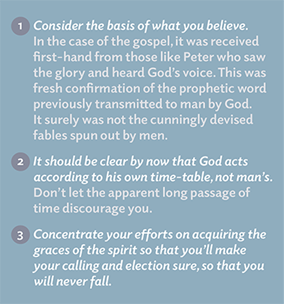 It was the condition of their faith that most concerned Peter. He addresses his audience by acknowledging that they "have obtained, like precious faith with us." That was a result of the Lord's blessing upon his ministry, Paul's ministry, whom he specifically acknowledges, and the other apostles. But he knows people get discouraged when things don't go the way they expect. So, he emphasizes three points on what they should do to keep their faith strong: The words of this letter are almost 2,000 years old, yet they speak to us with the same force as though Peter had written them today. Our faith that is being tried. We must not let either false teachers or discouragement lead us astray. Let us concentrate all our effort to add to our faith: fortitude, knowledge, self-control, patience, godliness, philadelphia love, and agape love. Peter ends with these words: