The LORD designed our planet to be an ideal home for His human creation. He entrusted the execution of this design to His beloved Son, for "all things were made by him, and without him was not anything made that was made" (John 1:3, Proverbs 8:22-31). This marvelous planet contains provisions for cycling all the chemical elements essential to life. No waste or poor management appears in this balanced model. In fact, we now recognize that the atmosphere, sea, and land are integrated in great chemical cycles that link all matter together to produce scarce chemicals, or conversely, to remove an excess of chemicals injurious to life.

Even the average temperature of earth has been maintained to within but a few degrees in a balanced system. These interlocking cycles present a marvel of control that we are now only beginning to comprehend with awe. God's wisdom is truly revealed in the balance of nature in which there is neither too much nor too little.

Mankind's Misuse of the Earth

Mankind tirelessly struggles to harness the resources God has so abundantly provided for our use and prosperity. Even an imperfect earth supplies tremendous resources (Genesis 3:17). But how frequently man misuses and abuses the earth, setting aside the council of scripture that we ought to use this world and not abuse it (1 Corinthians 7:31).

This abuse and environmental changes because of it, is well publicized in the media, and despite an increasing sensitivity to the problem, much of the pollution and resource mismanagement continues unabated. This certainly indicates a short-sighted perspective. 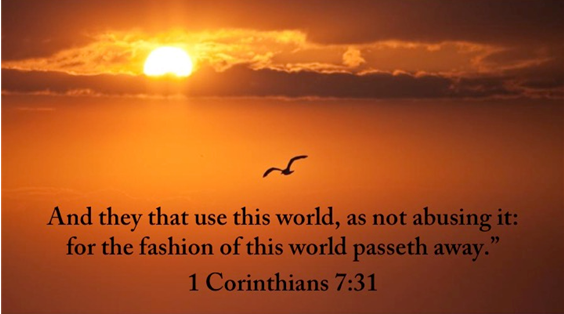 Regarding moral laxity, the Christian writer Charles Russell noted that it is the lack of immediate retribution for our wrong course that leads us to continue to violate moral principles. Solomon supported this when he wrote, "Because sentence against an evil work is not executed speedily, therefore the heart of the sons of men is fully set in them to do evil" (Ecclesiastes 8:11). However, in due time, the consequences inevitably follow .

This same principle is true with the management of the earth. Directions for wise stewardship of the earth were provided to ancient Israel. For example, when the Israelites first entered Canaan with their leader Joshua, farm lands were assigned to all the families by random lot (Joshua 13:1,2;15;16;17). The land was a gift from the LORD. From that time on, the people were enjoined to observe a Sabbath for their own rest (every seventh day was to be a day of rest). IN addition, they were to permit their farmlands a Sabbath of rest every seven years, in which their lands would remain unseeded.

Today, this is recognized as exemplary land management-- though it is not often followed!

After seven rounds of this seven-year cycle, the fiftieth year was to be a grand cycle of rest, called the Jubilee Year. In the fiftieth year the land would rest an additional year (See Leviticus 25:8-34). This extraordinary feature was to be a year of restitution of whatever was sold or traded away. Lands and property were restored to their original owners and slaves were freed to begin a new life.

This Jubilee system was intended as a wonderful picture of God's kingdom on earth. Everything lost in the Garden of Eden will be restored to the human family. Our first parents were given dominion of earth and were required to manage the many lovely resources of their garden home. They were created both physically and morally perfect. Their right to perfect human life was guaranteed as long as they obeyed the laws of God. However, once they disobeyed they lost their right to life and the tremendous benefits of living in a perfect paradise.

But humanity was not left without hope. The sacrificial death of Jesus, which offset the sin of Adam, will lift the curse which has brought such suffering to the world (See Revelation 22:3). In reflecting the concept of the Jubilee system, the Apostle Peter alluded to, "the times of Restitution of ALL things which God hath spoken by the mouth of all His holy prophets since the world began" (Acts 3:19-21). This restitution is God's promise to mankind. We will be restored to the perfection and beauty of a paradise home, first experienced by Adam and Eve. This earth will become the renewed Garden of Eden. The care and management of this home will be our gift from God when dominion is fully restored.

The prophet Isaiah described this kingdom when he wrote, "The wilderness shall rejoice and blossom as the rose" (Isaiah 35:1). This is the kingdom Jesus taught us to pray for when, in his model prayer he said, "Thy kingdom come, Thy will be done on earth as it is done in heaven" (Matthew 6:10). We can offer up this same prayer in full assurance of faith that we are on the very threshold of seeing it become reality. The Apostle Paul refers to this new arrangement in his letter to the Ephesians.

“ So abundant was God’s grace, the grace which He, the possessor of all wisdom and understanding, lavished upon us, when He made known to us the secret of His will. And this is in harmony with God’s merciful purpose for the government of the world when the times are ripe for it the purpose which He has cherished in His own mind of restoring the whole creation to find its one head in Christ; yea things in heaven and  things on earth, to find their one head in him.”  Ephesians 1:7-10 (Weymouth translation)

Father Adam had a relationship with God that was also lost in the fall. However, this too will be restored and will comprise the work of the Millennium, to bring each individual man and woman back into harmony with our great Creator. 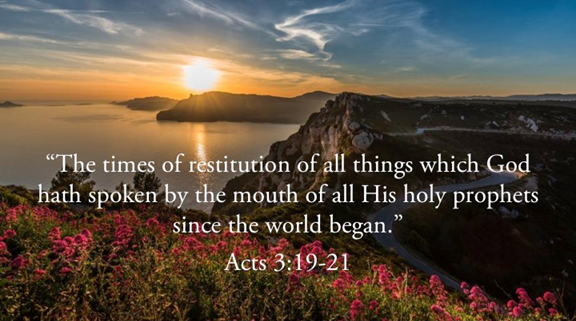 For additional material regarding the significance of Israel's Jubilee System see: