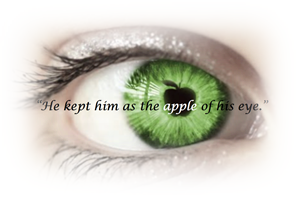 "For Jehovah's portion is his people; Jacob is the lot of his inheritance. He found him in a desert land, and in the waste howling wilderness; He compassed him about, He cared for him, He kept him as the apple of his eye."

This phrase, "apple (pupil) of His eye" is found a number of times in the Scriptures. It is an endearing phrase used by God to describe His love and care for His Chosen People. God used this description because the natural eye is very precious and needs to be protected. 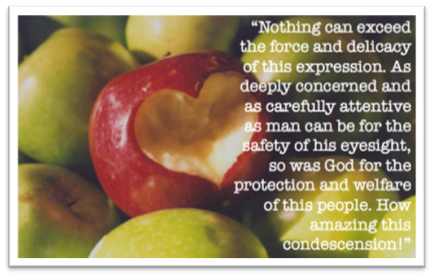 Regarding the phrase "apple of His eye," one Biblical commentator Adam Clarke says, "Nothing can exceed the force and delicacy of this expression. As deeply concerned and as carefully attentive as man can be for the safety of his eyesight, so was God for the protection and welfare of this people. How amazing this condescension!"

From the very beginning of its existence the nation of Israel had a special place in the heart of God. Through the Law and the Prophets, He instructed them in righteousness and was their protector. God even described Israel as His own inheritance (Deut. 32:9). Being God's inheritance tells of His intent to use them in a special way to bring blessings to others through the promise made to Abraham.

"Keep my commandments and live, and my teachings as the apple of your eye. Bind them on your fingers; write them on the tablet of your heart. Say to wisdom, you are my sister, and call understanding your intimate friend" (Proverbs 7:3-4, NAS).

Here is an admonition for Israel to look at the Law given to Moses as the apple of their eye. In other words they should treasure it, care for it, observe it and keep it holy. They should see it as something precious that is to be preserved. 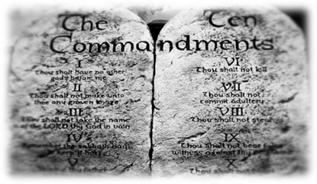 When they were told to "bind the Law upon their finger," it reminds us of a common expression, "to keep it at your fingertips." In other words, practice it and live by it. The essence of this admonition is that Israelites should have an emotional connection to the Law and they should love it as was expressed by Jeremiah. "Thy word was unto me the joy and rejoicing of mine heart" (Jeremiah 15:26). "Your Law is within my heart" (Psalm 40:8). 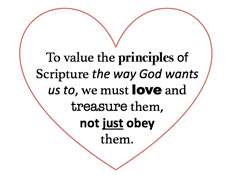 In these words we see a principle that we, as Christians, can take to heart. We should love the Truth of the Scriptures and live by their standards. If we see scriptural principles only as rules we must follow, then we are not going to write them on our hearts. We are not going to protect them as the apple of our eye or treasure them and bind them on our fingers. To value the principles of Scripture the way God wants us to, we must love and treasure them, not just obey them.

A Prayer of David 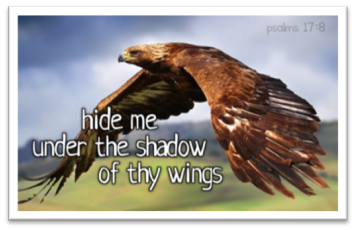 In a heartfelt prayer to God, David said, "Keep me as the apple of the eye; Hide me under the shadow of thy wings, from the wicked that oppress me, from my deadly enemies, who compass me about" (Psalm 17:8, 9, KJV).

David was asking God to protect him from his enemies. As a warrior, King David was constantly under attack, and so, he sought divine protection. David was wise enough to understand his need for God. He had learned this lesson very early in life.

One Christian writer drew a spiritual lesson from this when he wrote, "Every battle we fight and every victory we win through faith in God develops strength for future conflicts." As David called to mind previous occasions when God delivered him from his enemies, he was able to use those memories to help him trust God in current situations. From this we see that faith is built upon faith. Previous experiences are necessary in order to build strength for current trials. David did his part in trusting God while God provided the needed protection for David and for Israel.

A Time of Mourning

"Their heart cried unto the Lord, O wall of the daughter of Zion, let tears run down like a

river day and night: give thyself no rest; let not the apple of thine eye cease" 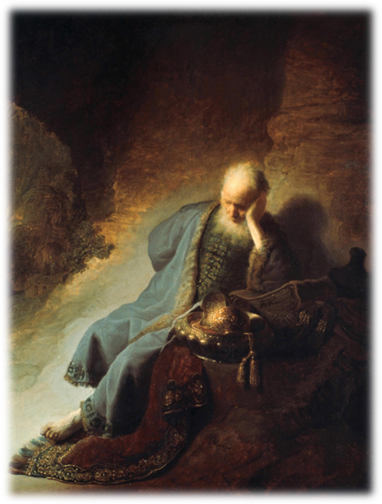 The book of Lamentations was written by the Prophet Jeremiah as a lament for the desolation of Jerusalem during the Babylonian Captivity. Jeremiah loved Israel so much that he grieved when it was troubled and distressed. He yearned for God to bless Israel and so he endeavored to reform their hearts. Unfortunately, widespread reform did not happen in his lifetime. When Jeremiah wrote, "tears run down the walls like rivers day and night," he was expressing grief for the destruction of Jerusalem.

When he said, "let not the apple of thine eye cease" he was making a different point from the way this phrase is applied in other passages. Jeremiah was saying to the people, "do not let your eyes cease from tears for the desolation of Israel."
The New American Standard Version renders the verse, "Let your eyes have no rest." So, in this case, it is not a picture of God's protection or of Israel's place in God's heart. This is a picture of the sorrow Israel should have over their plight. The Babylonian Captivity was a great time of mourning for Israel.

Touching the Apple of His Eye

The last occurrence of the phrase "apple of the eye" is found in Zechariah 2:8. "For thus saith the LORD of hosts; after the glory hath he sent me unto the nations which spoiled you: for he that toucheth you toucheth the apple of his eye" (KJV).

These words were written after Israel's return from the Babylonian captivity. The Assyrians and the Babylonians were the instruments used by God for Israel's punishment; however, these nations were unusually cruel and motivated by evil intentions. God therefore determined that they would be punished for the wickedness they inflicted on His people. They harmed the apple of His eye, and as a result, had to suffer the consequences. 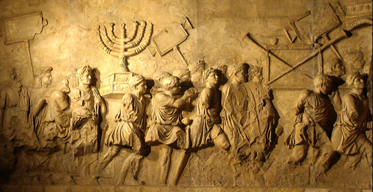 Assyria, which decimated the ten northern tribes of Israel, suffered the destruction of their capital city Nineveh, and subsequently lost their dominion to Babylon. Babylon, which destroyed the temple of Jehovah and carried the kingdom of Judah into captivity, was overthrown by the Medes and Persians.

Like Jeremiah, Jesus wept over the trouble that was still coming to Israel. He knew that the coming punishment would be far greater than in the days of Jeremiah. For 1,845 years the people of Israel would be dispersed throughout the world. They would experience a withdrawal of God's favor, unparalleled by any other trouble they had experienced. And yet, like Assyria and Babylon, those who oppressed Israel over the past 2,000 years, did so in such a wicked and perverse way that they, too, are destined for punishment. 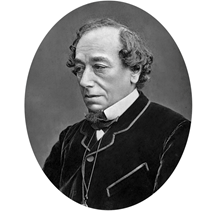 Reflecting back on that time, British Prime Minister Benjamin Disraeli once said, "The Jews are a nervous people. Nineteen centuries of Christian love have taken a toll." What a condemnation of Christianity. "Christian love," as he called it, consisted of many unchristian acts on the Jewish people.

To get a sense of how badly Jews have been treated during their time of dispersal, below is a partial listing  of  some of the events that brought distress and persecution to the Jews. The extent of their mistreatment is overwhelming.

Then began the persecution of Jews by Christians:

The Synod of Narbonne required Jews to wear an oval badge. This was reinstituted in the 1930's by Hitler, changing the oval badge to a Jewish Star. 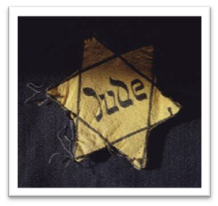 The Synod of Narbonne required Jews to wear an oval badge. This was reinstituted in the 1930's by Hitler, changing the oval badge to a Jewish Star.

The Spanish inquisition started and in 1252 AD, Pope Innocent IV authorized the use of torture.

These statistics take us only to the mid 1300's. There are many more anti-Semitic events down to our day. But this is enough to see an attempt to destroy the Jewish race.

Another incident that occurred about 500 years later marked a turning point for these persecuted people. 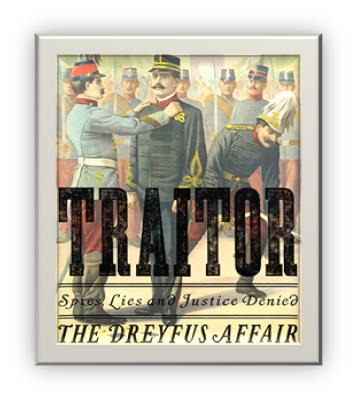 In 1894, a French captain of Jewish descent, by the name of Alfred Dreyfus, was falsely convicted of treason by a secret court martial. He was sentenced to life imprisonment on Devil's Island, a penal colony off the northeastern coast of South America. He was convicted for allegedly passing French military secrets to the German Embassy in Paris.

Before he was sentenced, Dreyfus was humiliated by being publicly stripped of his rank. The evidence against Dreyfus consisted of a torn up piece of paper found in a German embassy wastebasket, which was later proven to be written by a French army major by the name of Esterhazy. High-ranking military officials suppressed this new evidence and Esterhazy was unanimously acquitted during the second day of his military trial. Instead of being exonerated, Dreyfus was further accused on the basis of false documents fabricated by French counter-intelligence officers seeking to re-confirm his conviction.

A well-known political journalist, Emile Zola, did his own investigation into the affair and eventually wrote an article in a French newspaper. It ran on the first page of L'Aurore, which means "The Dawn." That article led to the first glimmer of hope for Jews everywhere. The article ran as an open letter to the president of France and accused the French government of anti-Semitism. This created such a public outcry that Dreyfus was returned to France and after another two years in jail, his guilty verdict was annulled. 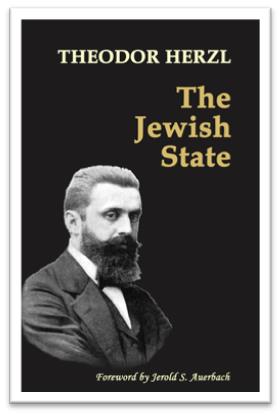 In this affair we see the hand of the Lord working through a journalist by the name of Theodor Herzl, who had been assigned to report on the original trial and its aftermath. Following the Dreyfus trial in Paris, Herzl witnessed mass rallies chanting, "Death to the Jews!" He came to believe that anti-Semitism in Europe would not go away and that the only solution was for Jews to remove themselves from Europe and create their own state.

In 1896 he wrote the book The Jewish State - An Attempt at a Modern Solution of the Jewish Question. That book led to the founding of the Zionist Movement, which fought for a Jewish Homeland. About fifty years later the state of Israel was born.

The "Dreyfus Affair," and its effect on Herzl, became a turning point for the Jews. Their time of forced servitude was over and the next phase of God's plan was taking shape. But anti-Semitism persisted. There is no need to elaborate on what followed with the Holocaust and the hatred that exists even today against God's chosen people. Satan is still trying to destroy the earthly seed of Abraham in order to thwart God's plan of salvation.

Israel has now been duly punished, and yet, the Lord has said that those responsible for these things will have a price to pay. The Zechariah passage said that God would shake His hand against any who touched "the apple of His eye" (Zechariah 2:8, 9).

It is our privilege to live in a time when Israel has been restored as a nation. Though they have not yet accepted Jesus as their Savior, that day is fast approaching. Whenever asked about Israel, our expressions can turn to this endearing phrase used by God that they are the apple of His eye. He will guide and protect them as the nation is being prepared to accept the Messiah and work within the administration of God's earthly kingdom (Jeremiah 31:31, 32).