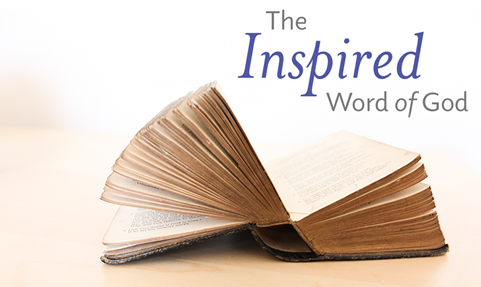 Bold Claims of the Bible

The Bible is not timid in boldly claiming its own inspiration. Note the following texts:

In the past 150 years, critics have been increasingly bold to challenge this concept of inspiration on four main grounds:

The challenges are no doubt sincere and often the result of heavily researched scholarship. Nevertheless, they remain theoretical, and are open to counter-challenge. Let us briefly review the four main areas of criticism. 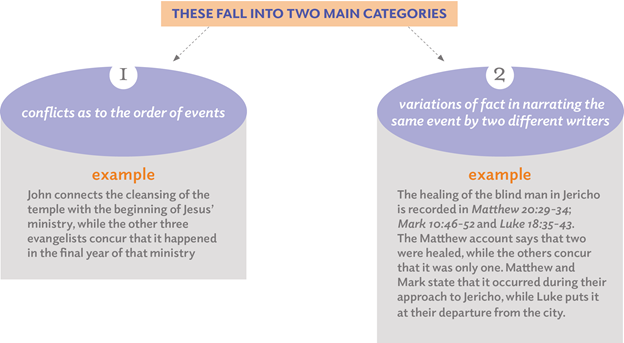 The answer to the first problem, conflict as to the order of events, is comparatively simple. Only Luke, of the Gospel writers, claims to be writing a record of the historical events which precipitated the ministry of Jesus. Also, in some cases one writer records one event while another records a similar, but different, event from a later period. That is what is happening here. Luke records that Jesus' ministry began with a cleansing of the temple. The other Gospel writers record that Jesus did it again near the end of his ministry. Rather than being a conflict, the combined testimonies  reveal that Jesus' ministry began and ended with a cleaning of the temple from money changers.

The second apparent conflict requires a deeper inquiry into the nature of inspiration. While many variations in recorded events can be clarified with continued study, others remain. However, the Bible does not claim  that every word was dictated by God. Rather, the inspiration of the Scriptures is conceptual, leaving the observers to record events in their own words, while exercising general supervision to prevent important factual inaccuracies.

A conflict is sometimes noted simply because we have not received enough information regarding the details. It is generally believed that Mark wrote his account from information shared by the Apostle Peter. The fact that his account is the only one which provided the name of one of the healed men may suggest that Peter was familiar with the man. This may have been why he did not mention the other blind man. Or, it may be that the one named, Bartimaeus, may have been the individual crying out on behalf of the two. These slight differences may actually bolster the fact that there was no collusion between the Gospel writers, with each recollecting different details. A visit to a modern court room will suffice to show how each observer or witness sees events from their own peculiar perspective. While each is accurate, one may place greater stress on one item than another.

Archaeology and the Bible

Scores of archaeological expeditions dig deeply into the Middle Eastern soil each year to fine "hard" evidence of the accuracy or inaccuracy of Biblical records. While frequently recovering confirming artifacts, there are numerous occasions when the record in stone apparently conflicts with the written word. These, the critics are quick to point out, argue against the inspiration of Scripture.

Professor W. F. Albright of The American Schools of Oriental Research writes: "There can be no doubt that archaeology has confirmed the substantial historicity of Old Testament Tradition." The remarkable references to Abraham in the excavations at Ebla and the uncovering of Pontius Pilate's name at Caesarea are good examples. But what of the other occasions where there are conflicts? It is important to remember that archaeology is not an exact science, but an interpretative one. The evidence it unveils is factual. The interpretation of that evidence, however, may not be so. Frequently two or more schools of interpretation are founded upon the same unearthed evidence. Suffice it to say that no direct contradiction of the Biblical record has yet been found. All seeming contradictions have resulted from the interpretation and dating of that evidence.

What of the conflicts between recorded history and the Bible? One might as well ask, "What of the conflicts between recorded history and recorded history?" Differing accounts between historians are numerous simply because they are subject to the bias and interpretative slant of their given historian. Even today the same current event when read from a newspaper in the United States and another, say, from Russia, almost appears to be a different event. Once again, the example of the modern courtroom interrogation of witnesses emphasizes the uniqueness of each observer's viewpoint.

The schools of Higher Criticism that developed in the 19th Century have challenged much of the authorship of the Bible. Educated and scholarly discussions of internal evidence for multiple authors of Genesis or Isaiah have created doubts in the minds of many sincere readers of the Scriptures. But once again we are dealing with theories and not documented facts. Sufficient to the reader of faith will be the simple statement of Jesus of Nazareth, "as Moses wrote" omitting any speculation into multiple authors and secret documents (see Matthew 19:7-8; Mark 10:3; Luke 20:28; John 1:45). Some critics call our attention to Isaiah 44:28 and 45:1 where, many years before Israel's Babylonian captivity, the name of Cyrus is mentioned, years before he was born. But is that so surprising? One of the greatest claims for Biblical inspiration is the accuracy of its prophecies. Some 40 prophecies were specifically fulfilled in the events concerning the life of Jesus of Nazareth. We note just a few for ready reference: 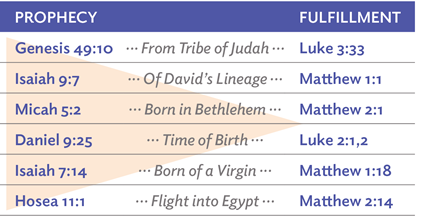 A wise man once wrote, "it not only required an inspiration to write God's plan, but it also requires help from the Almighty to give an understanding of this revelation. The Apostle Paul treats this theme in 1 Corinthians 2:11-14:

What Paul writes is clear. To understand spiritual things one must become spiritually minded. To become spiritual, one must give up his own natural will, and turn his mind over to God for the comprehension of God's will and His word. It is the same kind of dedication, or consecration, to do God's will which Jesus made to fulfill the words of Psalm 40:7-8. 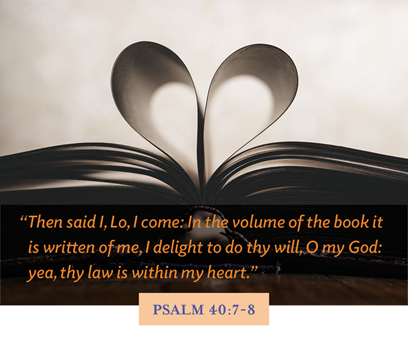