The prophet Zechariah made a profound declaration in Zechariah 4:10:

This is a rather strange statement. What were the circumstances that caused Zechariah to ask this question?

At the time, the Israelites were released from Babylon and permitted to return to Jerusalem to rebuild the city and the temple. When they arrived, they were shocked to find the result of 70 years of desolation. The wall and the temple were in ruins. Private residences were demolished, and the place was more like a wilderness than a city.

Where would they start to rebuild? Considering Zechariah's question, several things become apparent. Little things are important, not because of what they are in themselves, but because they can be part of something greater. The building of the temple required many individual stones, small elements that would make up the large building. Yet there could be no temple without the individual stones. The Prophet's message then was to start building, one stone at a time.

This small beginning would reveal a powerful truth. The Lord can transform an insignificant stone into something functional and beautiful.
Therefore, in many cases nothing is too small for God to use for His purposes.

Nothing Too Small for God to Use 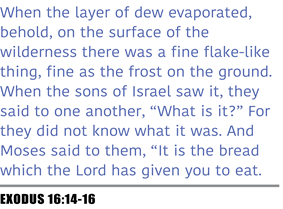 The Scriptures reveal several little things that demonstrate that nothing is too small for God to use for His wise purposes. In Exodus 16:14-15, a reference is made to a small thing that lay on the ground. It came to be known as "manna." It appeared so insignificant that its very name means, "What is it?" Yet it provided food for all the children of Israel as they wandered in the wilderness for 40 years.

The power of small things is also shown in an ordinary pebble. We are told of five pebbles, small and round, in 1 Samuel 17:39-40 that were gathered by the 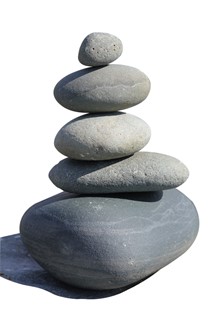 boy David before he faced Goliath. These five pebbles, combined with a homemade sling, possessed a potential power, but only one of those little stones was required to defeat the giant enemy of Israel.

Israel's king, his armor and all his army stood powerless. The Lord elected not to use their might. Instead, He turned to an insignificant shepherd boy who was instructed to gather five smooth pebbles. From these pebbles, he selected but one. This one pebble was all that was necessary. What awesome power in a small, insignificant object! By itself, it was worthless. But given the proper circumstance and the direction by God, it spelled victory for Israel.

Moses Developed as a Leader

Scripture reveals that Moses was the meekest man in all the earth(Numbers 12:3). He recognized that one of his deficiencies was being poor in speech. How could he represent God? There would have likely been better men in Israel to pick for this task. Many would have excelled in speech over Moses. But God does not always need a strong, talented, articulate individual to accomplish His purpose and speak for Him. However, God does require one who will yield to His requests—a humble and meek person.

In the narrative God again used a small thing to convince Moses he was God's choice to be Israel's deliverer. Moses said, "Lord, they will not believe me, nor hearken to my voice." The Lord responded with a question. "Moses, what is in your hand?" "A rod," replied Moses. The Lord then said, "Cast it on the ground." To his amazement, that common rod became a serpent. As Moses began to run for safety God issued a command. "Moses, take up the serpent by the tail." Moses obeyed and instantly that serpent became his plain rod (Exodus 4:1-5).

Like Moses, we may feel we have nothing to offer in God's service. But if we are willing to try, God can work miracles and make even insignificant things contribute to a larger cause. He is able to use even the most uneducated and untalented people to serve His purposes. Moses was to learn that lesson for himself. The Scriptures declare, that God can make all things work together for our good when we work to serve Him (Romans 8:28).

The Widow's Pot of Oil

An illustration showing how God can provide is shown in the case of the poor widow (2 Kings 4:1-7). This woman was in great poverty and her creditors were about to take her two sons as payment for her debt. She appealed to Elisha for help. Elisha asked, "What do you have in the house?" Her answer was, "Nothing really, except a small pot of oil." Elisha instructed her to "Get all the empty vessels you can. Go to your neighbors and borrow all you can." When all these empty vessels were assembled, the widow was told to start pouring out of her meager supply into all the vessels she had obtained. Suddenly she realized that her meager supply filled all the pots. She then sold the oil and paid her debt. The Lord used what she had available. God's power made a small thing very valuable and she was able to save her two sons.

Jesus' miracle in feeding thousands of hungry people is another example of the miraculous ways the Lord can use small things. As he gazed over a crowd of 5,000 who had come to hear his message, Jesus could see they were hungry and ill prepared. But the disciples informed him they had only five loaves of bread and two fish. Jesus had them gather the people together and blessed this meager amount of food. The food was miraculously multiplied so that all 5,000 were fed with 12 baskets of food leftover (Luke 19:10-17).

It is important to recognize the Lord's ability to bless the common, the ordinary, the small, the insignificant things to accomplish His will. Sometimes the Lord will use little people, people who do not have any standing, to accomplish great things.

A Small Voice in the House of Naaman

There is an interesting story recorded in 2 Kings 5. A general in the Syrian army by the name of Naaman had an incurable disease—leprosy. All his wealth could not cure this terrible plague upon his life. But in Naaman's household, there was a little Jewish maid servant.

This girl remembered the prophet Elisha, who, through divine power, healed diseases. This little maid had two fine characteristics: faith in the Lord and love for her master. She was not happy that Naaman was suffering and sympathized with him. She wanted him healed. So, she spoke to Naaman, informing him that the prophet Elisha was God's prophet and could heal him. Naaman perhaps wondered about this advice from his young slave girl. Yet her sincerity convinced him to journey to Israel in search of the prophet Elisha. After following the unusual instructions of Elisha Naaman was healed.

One of the lessons in this story is that the Lord is able to use anyone, no matter how insignificant they may seem, to bless others. Here a young Jewish slave girl was God's messenger to a mighty Syrian general. God wants people who are big enough to be small.

There are times when the Lord will deliberately reduce large things to emphasize the importance of humility. In Judges 7, Gideon had an army to fight the Midianites. But the army was too large for the Lord's use. God informed Gideon of this and states the reason in Judges 7:2.

The original army numbered 32,000. Through various means the Lord finally reduced the number to a mere 300. By human standards, this would border on disaster. Certainly 300 soldiers would be no match for the large Midianite army. But small things in God's hands become powerful. These 300 were a very select group, devoted to the cause, and the Lord used them very effectively to gain victory over the enemy.

This lesson seems to be one which Israel has yet to learn in our day. Not until she is prepared to give God the glory will her final deliverance come. The principle on which the Lord works is given by the prophet in Zechariah 4:6.

All Experiences Can Be Used For Good 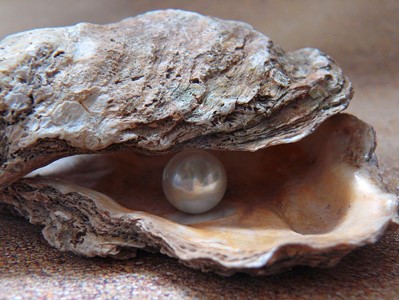 Even small irritations in life can result in character growth. The oyster provides a meaningful lesson. Irritations get into his shell. If he cannot get rid of them he uses the pesky irritations to make a beautiful pearl.

Everyone has irritations in their lives which cannot be removed. For these irritations there is only one remedy—make a pearl. It may be a pearl of patience or a pearl of a sympathetic heart. Knowing how to properly deal with these issues of life will eventually develop wisdom, an essential quality for every Christian.

Be Faithful with Little Things

In considering the influence of little things, we recognize the statement of our Lord found in Luke 16:10. Herein lies a great principle, a principle that can almost be universally acknowledged. Life's experiences have taught that whoever can be trusted with little things can be trusted in great matters. A man who is cautious in respects to small affairs is cautious also in important undertakings. The Lord applies this to His followers.

The opposite principle is also true. Whoever is careless in small things will likely be careless in larger matters. In due time these individuals will prove to be unreliable and unfaithful. In other words, the little things in life have power. They have an important bearing on our character building. Everything—no matter how minute—affects character and deserves careful study.

Many times, major troubles develop through minor misunderstandings. Just because a deed or an event is small is not a good reason for ignoring it, and the phrase, "It doesn't really matter," should be used sparingly. 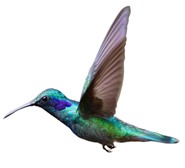 In 1 Corinthians 10:31, Paul says, "Whether you eat, or drink, or whatsoever you do, do it to the glory of God." Even the smallest acts of life should be to this end, to honor God.

In Matthew 18:20, Jesus said, "Where two or three are gathered together in my name, there am I in the midst of them." Even a tiny gathering can be energized by God's Spirit. The Lord is interested in quality, not quantity.

When you have the Lord, a small number becomes strong and powerful. In other words, we are insignificant with very little value when we stand alone. But as soon as the Lord stands beside us, we become precious to Him. He can make a very small number significant and strong when He is in their midst.

The Apostle James calls our attention to some forceful illustrations of the power of small things. In James 3, he speaks of a common bit in a horse's mouth which can direct the powerful animal. He describes a small rudder that can control a large ship. These are but small objects, yet capable of maneuvering large things. In verse 5, James identifies one of the least members of the body, yet the most influential. He describes the behavior of this small, unruly member of our body—our tongue.

The power of the tongue can set on fire the course of the Christian and cause one to lose the opportunity for immortality.

In James 3:7,8, the Apostle compares the human tongue to beasts, reptiles, fish and fowl, and declares that any of these may be considered tamable. But to conquer the tongue and to make it obedient and thoroughly reliable is even more difficult. This should be a sobering reminder to guard our words carefully. Our every expression should be uplifting and beneficial to others.

The little things in life are often overlooked. However, they can become important in the eyes of God. Christians who desire to live every moment for God's glory cannot overlook the importance of the little, seemingly mundane experiences and activities of life. These form the building blocks of character and faithfulness. To these rare individuals Jesus directed a precious promise. 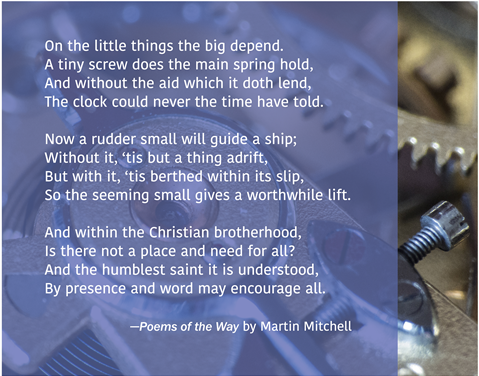