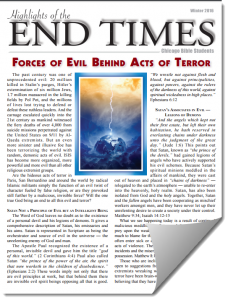 Newsletter: Forces of Evil Behind Acts of terror

The past century was one of unprecedented evil: 20 million killed in Stalin’s purges, Hitler’s extermination of six million Jews, 1.7 million massacred in the killing fields by Pol Pot, and the millions of lives lost trying to defend or defeat these ruthless leaders. And the carnage escalated quickly into the 21st century as mankind witnessed the fiery deaths of over 4,000 from suicide missions perpetrated against the United States on 9/11 by Al-Qaeda extremists. But an even more sinister and illusive foe has been terrorizing the world with random, demonic acts of evil. ISIS has become more organized, more powerful and more evil than all other religious extremist groups.

Are the hideous acts of terror in Paris, San Bernardino and around the world by radical Islamic militants simply the function of an evil twist of character fueled by false religion, or are they provoked still further by a malicious, invisible force? Will the one true God bring an end to all this evil and terror? 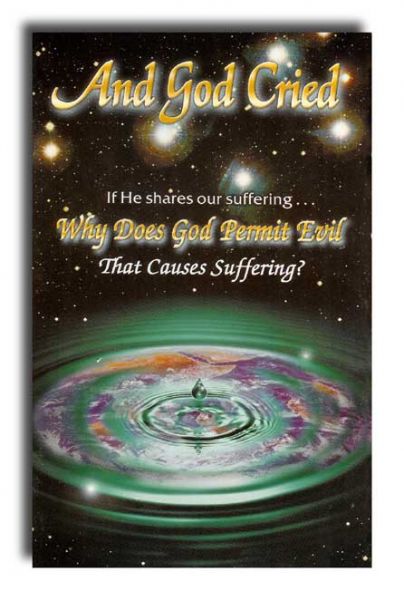 This booklet deals with God's reaction to sin and how he plans to deal with it. You will read the scriptures that reveal the true tenderness of God. As a loving Father He has compassion for the suffering of His children. You will also read some of the most recent scientific findings regarding the origins of the universe and the Bible’s authenticity.

"The question of why God permits evil first requires a definition. Webster defines evil as "that which produces unhappiness; anything which either directly or remotely causes suffering of any kind." Evil can be divided into two categories. There are moral wrongs or evils of individuals that inflict suffering upon others. Also the disasters of nature have wrought much suffering..."

Read/Download a FREE copy of this booklet Online

Order one FREE Copy (US Addresses Only)

Or you may order more copies by clicking here.