The day of the Lord will come as a thief in the night; in the which the heavens shall pass away with a great noise...look for New Heavens and a New Earth, wherein dwelleth righteousness.” — 2 Peter 3:10-13

At the beginning of the seventh day God rested from his work and left the dominion of earth in the control of Adam and his family. Since that time, mankind has NOT done a “very good” job of taking care of this planet and its inhabitants. 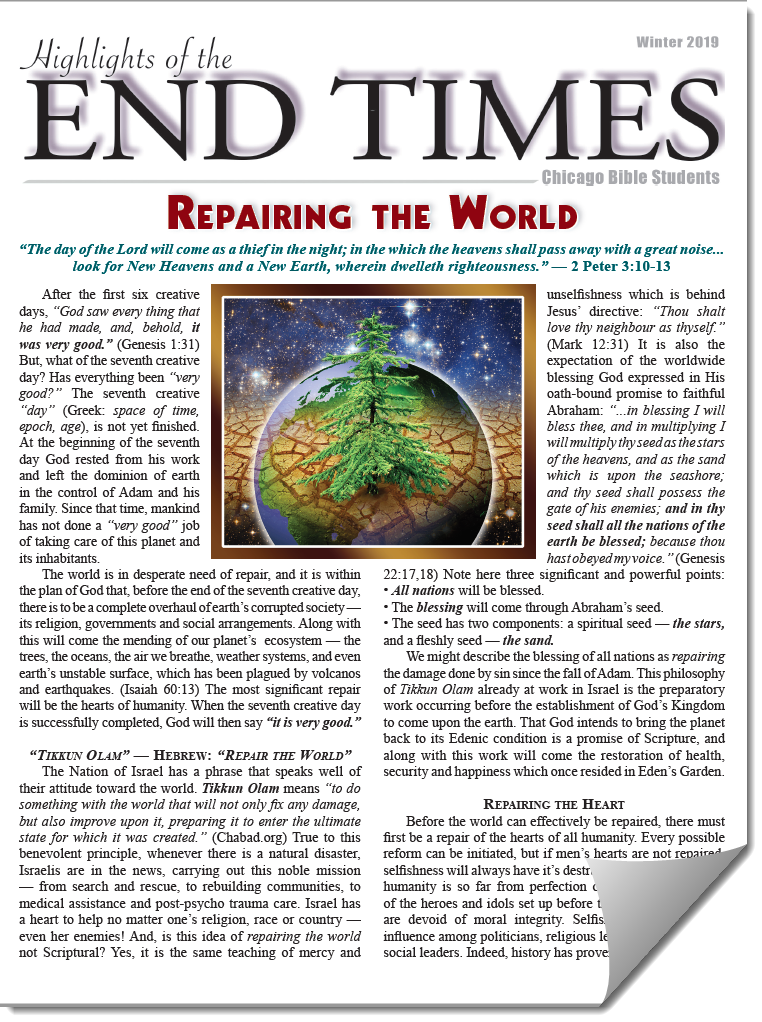 The world is in desperate need of repair, and it is within the plan of God that, before the end of the seventh creative day, there is to be a complete overhaul of earth’s corrupted society — its religion, governments and social arrangements. Along with this will come the mending of our planet’s ecosystem — the trees, the oceans, the air we breathe, weather systems, and even earth’s unstable surface, which has been plagued by volcanoes and earthquakes. (Isaiah 60:13) The most significant repair will be the hearts of humanity. When the seventh creative day is successfully completed, God will then say “it is very good.”

FREE Booklet Offer: "What is this World Coming to..."

The world events of this last decade of the Twentieth Century were like the thunderclaps of a gathering storm—such as there never was. What do these ominous rumblings of society portend? And is there any hope for the world on the other side of this imminent and promisingly furious storm’?
With the collapse of the communist camp in Russia and Eastern Europe, the cold war ended. But the era of assured peace was soon eclipsed by the Middle East crisis. The Third World Nations have become armed camps of instability that pose a continual threat to world peace. Since the nineties, the United States has carried a record debt and with recurring economic recessions (...)

Is it any wonder that so many ask, ‘‘What is this world coming to?’’ Some go further and reason, ‘‘If there is a God who cares, why does He permit all of this trouble?"

Download PDF online
Order one FREE Copy (US Addresses Only)